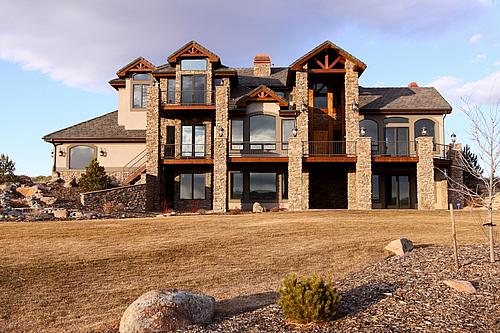 Notice the reflection of the clouds in this custom home perched high on the hill in Pradera Golf Club.

After writing an article detailing home sale trends over the past 4 years in Stonegate, another Parker, Colorado community, I was asked to produce the same stats for Pradera Golf Club.

Over the past 12 months I have witnessed a new found demand for high end luxury homes in Douglas County including the custom home communities of Pradera and The Timbers. We all noticed the demand slow down for about a 12 month period in late 2008 and early 2009 simply because banks would not lend money to high-end luxury home buyers.

Well the lenders are back and so is the pent up demand from custom home buyers. Currently a majority of the home sellers and buyers I’m working with are in what I consider to be the high-end market. Steve’s definition of high-end = anyone buying or selling above $750,000.

Here are the numbers for Home Sales in Pradera that have a sold closing price ABOVE $750,000 since 2007.

Total Sales by Year: (2008 was hot then the breaks were applied by the banks.)

Average Total Days on Market: (Like I said 2008 was HOT for custom home buyers)

Remember I am only showing stats from homes that sold and closed at or above the $750,000 price point in Pradera Golf Club.

Average NET $ or Price per sqft Sold: (This is the sqft on the main level and upper level. It does not include the basement.)