Say Hello To My Little Friends in Stonegate

Say Hello To My Little Friends in Stonegate

My first little friend is a mother-to-be hummingbird who has set up house in a tiny little nest in the aspen trees off my front porch.  My son named her Emerald or Emmy for 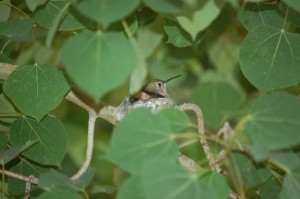 short since she has some iridescent green feathers on her head.   I have never before seen a hummingbird at a standstill, let alone sitting in a nest, so I feel quite fortunate that Emmy has chosen our porch area in which to raise her family.  She can be quite a feisty mama and will not hesitate to buzz us or any other animal in the vicinity if she feels threatened.  She is a dutiful mother and we hope we will be lucky enough to catch a glimpse of her babies when they hatch.   What a treat!

There is no love lost between me and my other “little friend” which I have named Harry, since he reminds me of the horrific snake from the second Harry Potter movie.  Harry is a 5 ft. long bull snake whom is neither little nor friendly in my book, and I am hopeful our acquaintance will be short lived.

I met Harry when I was unloading groceries into our garage freezer.  As I turned from my freezer back to my car for another load, I see Harry slithering away from my garage down my driveway (insert profanities here).  I am not sure if he was actually chilling out in my garage or if he just happened to be cruising by the door.  Both scenarios make me light headed and weak in the knees, but not in a good way like when I see the new Superman shirtless.  Given that I live across from Newlin Gulch you would think I’d have encountered many snakes over the years, but this was my first encounter with anything sizeable.  I suspect it will not be my last. 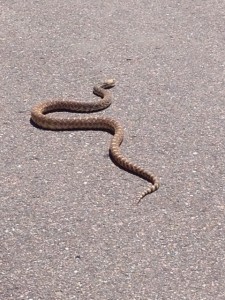 Thankfully, my neighbor happened to be outside in her driveway too.  While I was cussing and losing control of my bodily functions, Harry had calmly slithered through the grass headed towards her driveway.  We debated the merits of simply backing over him with her SUV, but since all of our kids were hanging around watching the drama unfold, that didn’t seem very Animal Planet-ish of us.  We tried herding him towards the street and back into the gulch, but Harry had other plans, quickly moving into her front yard.  The kids doused him with squirt guns, which he weirdly seemed to enjoy.  Then we tried pushing him with a broom.  He coiled up and started hissing at us like a leaking hot air balloon.  I ran to another neighbor’s house to borrow their snake grabber and I also grabbed my shovel.  I was done messing around.  Harry must’ve sensed things were about to get ugly, as he slithered under the fence into my other neighbors backyard where he disappeared under a large fir tree. Shew!  Not my yard.  Not my snake.  Not my problem.

Except for the fact that I like my neighbors and felt bad I had herded the Serpent of Death into their backyard.  When they were out of town. That’s what good neighbors do right?

I guiltily emailed my out of town neighbor a photo of Harry, introducing him as her new pet while apologizing for my inadequate snake wrangling skills. Thankfully she is not snake averse and could care less if Harry set up camp in her backyard.  Better for Harry and for me.  If our paths happen to cross again, I will not hesitate to beat him into a belt.

Thank you to my good friend  Chrisy Schulz for the article this month. I wish I could have posted the original email version of the snake encounter…